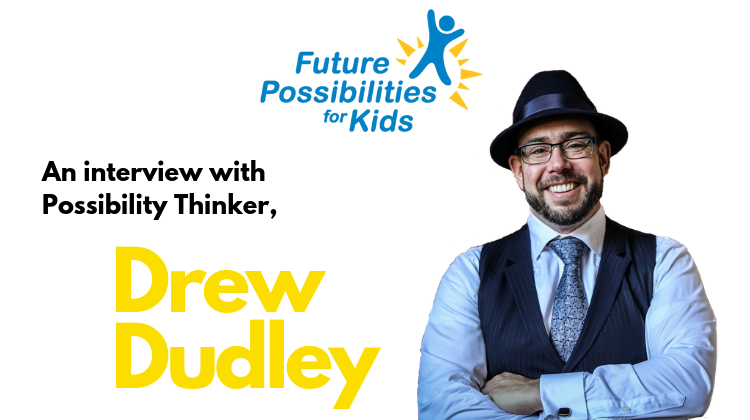 Leadership development expert, and friend of FPK, Drew Dudley, discusses how Possibility Thinking is an important factor in being an effective leader.

FPK: For those that are unfamiliar with what you do, can you tell us a little bit about yourself?

Drew: I am a leadership speaker, author, and educator, and which one I’m doing predominantly changes every year. I used to run a leadership development program at the University of Toronto and did a TEDx Talk that went viral; focusing on the idea that leadership can be accessible to everyone. Then last year I released my first book called ‘This Is Day One: A Practical Guide to Leadership That Matters.’ It takes the ideas that I’ve been sharing for the last 10 years that can’t all fit into one talk anymore. I shared the process that I’ve been teaching to companies, and individuals, on how to reframe leadership into a series of daily behaviors, and how to make sure that you pick exactly the right custom behaviors, for you, tied to your most important values. So how to help people identify their values, find what they mean, and then actually live up to them every single day. What that means is that I help people create their own customized leadership ‘to do’ list on a daily basis.

“I think that Possibility Thinking means working really hard to focus on how your behaviors today can create a future that you’re not even capable of conceiving yet.”

FPK: You spend so much of your life both personally, and professionally, motivating and inspiring others. Can you speak to what motivates you?

Drew: One thing to answer before I dive into the rest, is that I actually am not trying to motivate or inspire people. I like that people will often tell me that that’s been the impact of my ideas, but ultimately, and I try to pass this on to anybody else who is looking to have an impact on other people, I don’t try to motivate and inspire them. Try to be useful and try to think to yourself, what are the things that I can offer here that are going to be useful to whoever is listening, because in my mind, useful and compelling ideas are inherently motivating. If you offer somebody a thought, an insight, or a story that they can then relate to, you’re inherently going to motivate them and inspire them to want to go and do something. I think we’ve put a lot of pressure on ourselves to try to be inspiring, and the same idea with leadership, as it’s something a lot of people simply feel they can’t do. So the way I always think of it is well, how can we be useful?

The two key things that motivate me the most are watching when other people do one of two things – say, “Oh wow, I didn’t think of it that way.” Because as they say that you can see them start to believe that maybe there’s more that they can do than they thought. That’s one. The other is whenever I see someone react with, “I thought I was the only one,” or “I thought I was the only one who was afraid of that.” Because in my presentation I talked about some of the obstacles that I felt stood in my way to truly feeling like a leader, such as the fact that I had allowed myself to grow to 300 pounds because there was an undiagnosed bipolar disorder, which also tied to alcohol abuse. But when you see something you say give people permission to think more of themselves, or to forgive themselves, that, to me, is a really amazing thing to be able to do. That really motivates me.

FPK: Thank you for sharing that. Since you have been involved with FPK in the past, what does the term Possibility Thinking mean to you?

Drew: I think that Possibility Thinking means working really hard to focus on how your behaviors today can create a future that you’re not even capable of conceiving yet. Possibility Thinking to me doesn’t mean thinking about what life could be like in the future, instead it involves asking yourself what kind of person you want to be in the future.

The Kids who are engaged with FPK are exposed to the impact that they can create a lot earlier than other children because you’re showing young people what is possible. I think Possibility Thinking is showing young people that their ability to impact what the possibilities are is much more significant than they might’ve thought beforehand.

We often say Possibility Thinking is about believing what amazing things can happen in the future, but I think Possibility Thinking is less about believing what’s possible, and more about recognizing the role that you can play in creating that future. It’s not whether or not it’s possible, it’s whether or not you can make it possible. I think that is what FPK really does for young people – it shows them at a very early age that the possibilities in the future are a result of events, and once you get that empowerment at an early age, people are much more likely to see that.

FPK: How do you think being a Possibility Thinker relates to being an effective leader?

Drew: I think that ultimately the two things are tied together because if you don’t believe that you can have an impact on the world, you’re not going to be committed to building yourself into the best that you can be, because you don’t see yourself as mattering. Only by believing in the power that you have to create a future you care about, only by believing that you are motivated to behave in a way that you know will live up to who you truly want to be, that’s the only way you’ll feel like you matter.

I have to recognize that my concept of leadership might be a little different than a traditional definition. My definition of leadership is doing something to close the gap between the person you want to be and how you’re actually behaving. That type of leadership is a leadership that everyone can and should aspire to. Doing that often leads to many of the things that we’ve been taught are leadership – position, title, money, power, influence and prestige. Those are often seen as the markers of leadership, but my argument is that those aren’t actually leadership, those are the natural by-products of people who are living this life every day.

If you create non-negotiable behaviors that are tied to your core values, and you live up to them every single day, treating each day like it is day one on that voyage, ultimately, what happens is the possibilities you hoped for in the future, in terms of who you hoped to be, and how you impacted the world, become true.

FPK: What advantage do you think children have, over adults, in driving change within their communities?

Drew: I think many of the reasons we think we can’t do things is based on our experience, the older we get the more evidence we allow ourselves to collect that we don’t matter. The older we get, the more we focus on pleasing other people, and the less we focus on actually giving ourselves evidence that we’re good people and that we matter. That means that as we get older, what we tend to focus on are all the reasons why things can’t happen, and kids haven’t spent time gathering that evidence yet. Kids simply haven’t convinced themselves that they don’t matter yet, and I think that gives them a little bit of an advantage.

In terms of impacting our communities, I also think that there’s an expectation that young people aren’t ready to make a real impact yet. That’s why they’re going to school, because when you’re young you’re excused for not actively trying to make your community better. You’re just supposed to be a kid. So I think when you actually see young people engaging in making our community better there’s less cynicism from the adults around them, because when adults are saying they want to change the community, or change the world, there’s an inherent eye roll among other adults saying, “Uh, yeah, whatever, we all want to change the world.” But real life take’s over. When you see a young person do it, adults respond in a way that reminds them of how they used to be.

So kids have the real power because it’s almost as if we don’t expect it from them, and so I think that adults rally behind that. They see hope in that, and I think it re-energizes the adults of the community. The kids are truly inspirational because they make adults realize, and remember a time when they didn’t see the obstacles, when they only saw the possibilities, and I think that’s a really valuable thing.

“When we teach the concept of leadership, we have to make sure that we’ve broadened the definition of leadership so that it never occurs to them that this is something that they have to wait to embrace.”

FPK: How do you think that we, as adults, can instill the values of leadership in children at a young age?

So when we use presidents, scientists, ground breakers, and powerful high-profile people in order to illustrate what a leader is, it says to kids, this is what leaders are and they don’t look like you. These are older people. These are people wearing suits. So when we start to ask kids to think about, and evaluate, and identify leaders, they need to look like them.

I think that FPK does really well in showing new Kids in the program, Kids and projects from previous years as examples, so that there is no thought of “Oh, that’s not us.” The whole concept is introduced to them by using examples of people they can completely relate to, and in whom they see themselves.

“The kids are truly inspirational because they make adults realize, and remember a time when they didn’t see the obstacles, when they only saw the possibilities, and I think that’s a really valuable thing.”